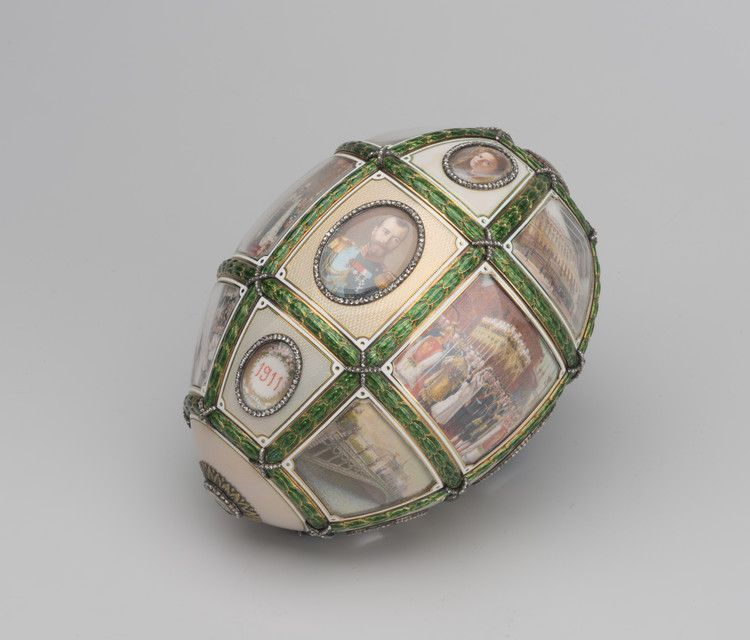 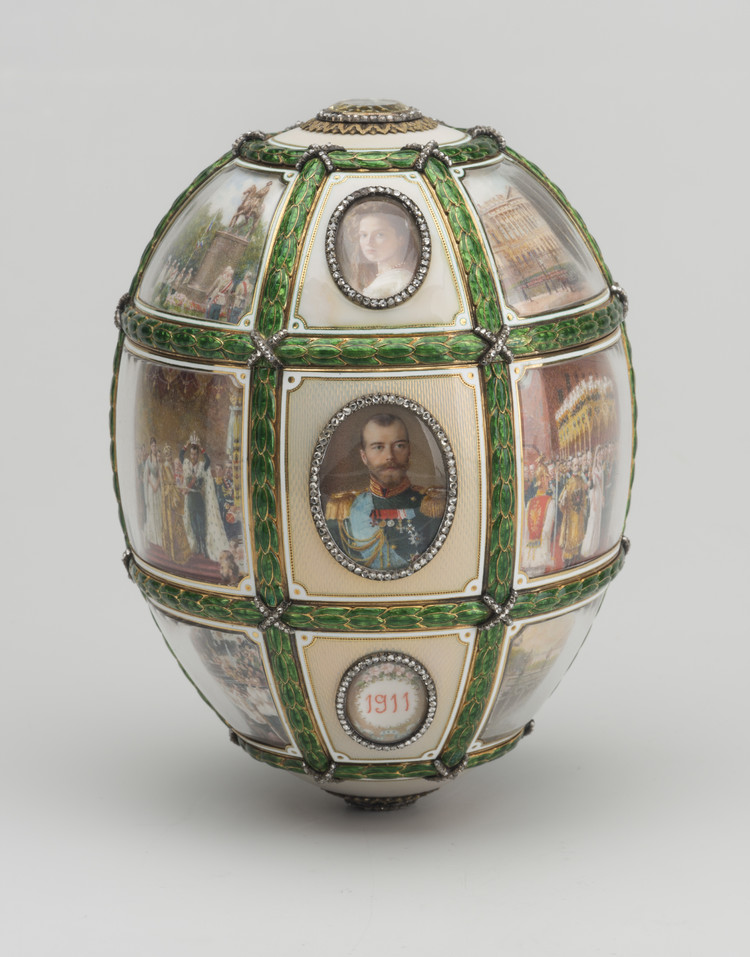 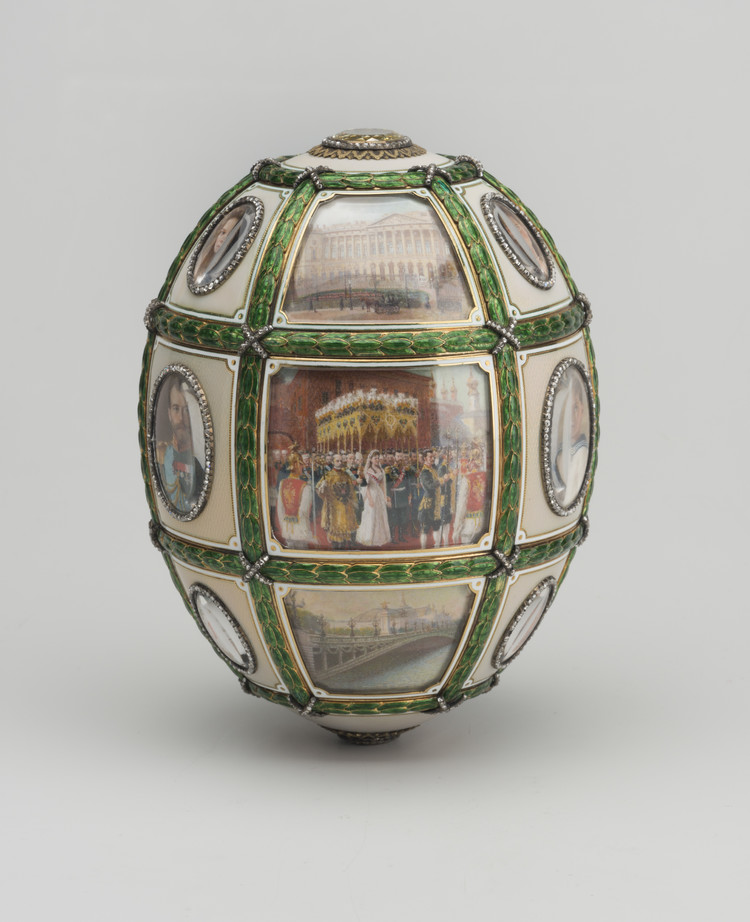 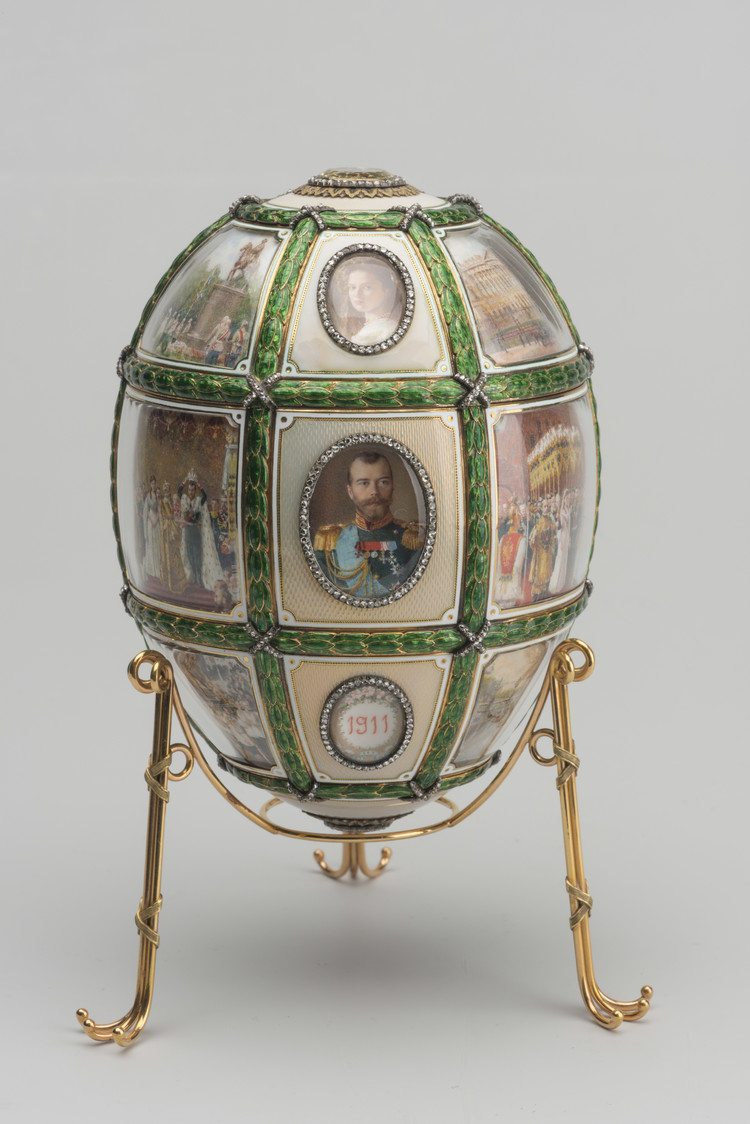 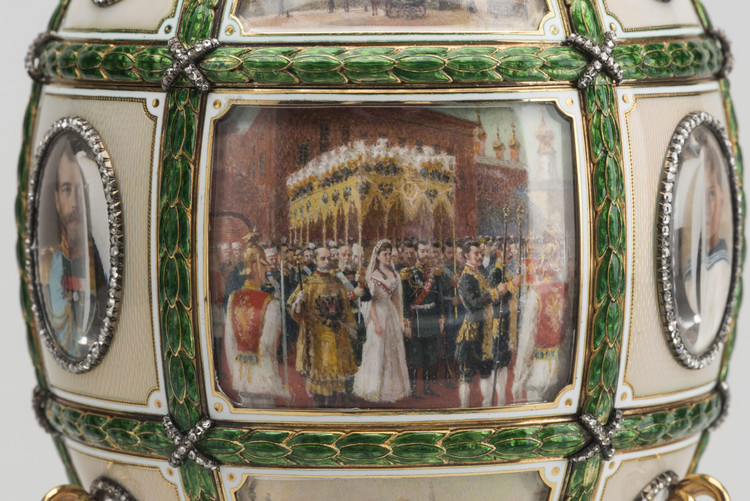 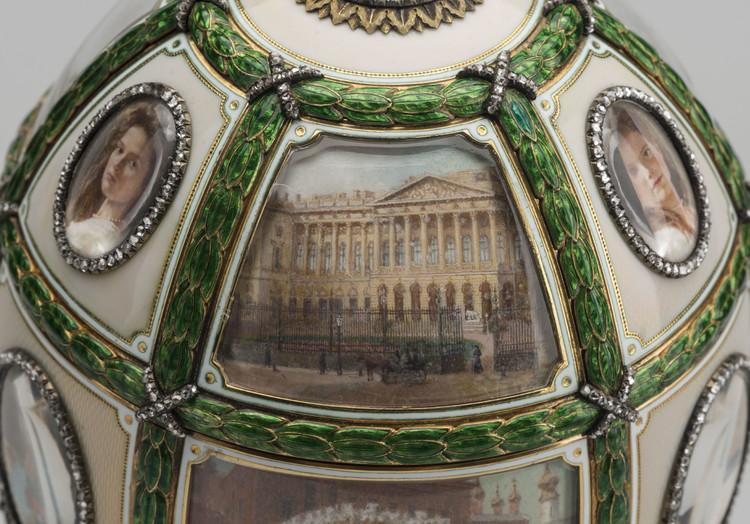 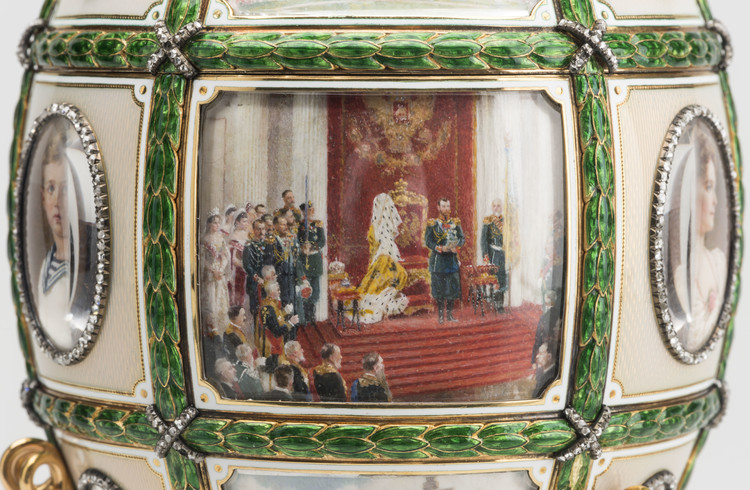 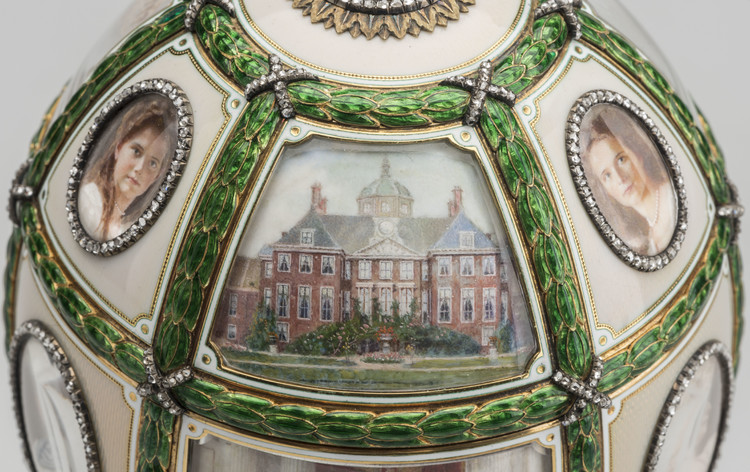 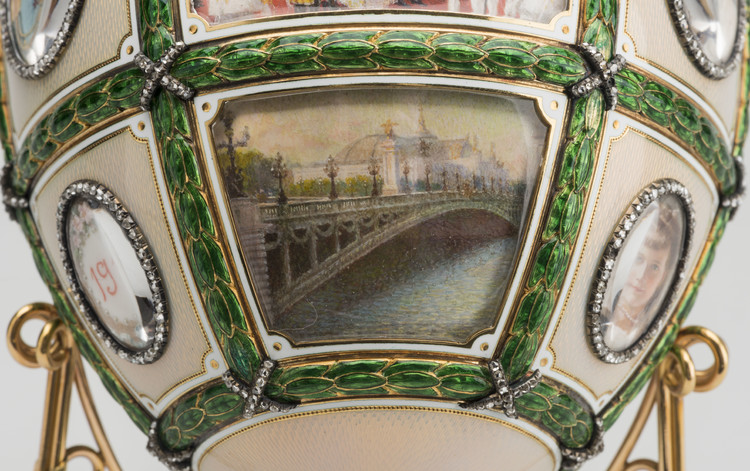 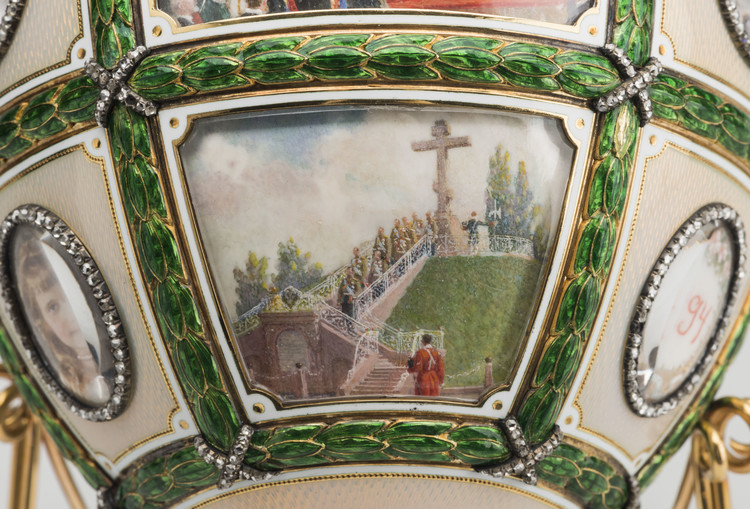 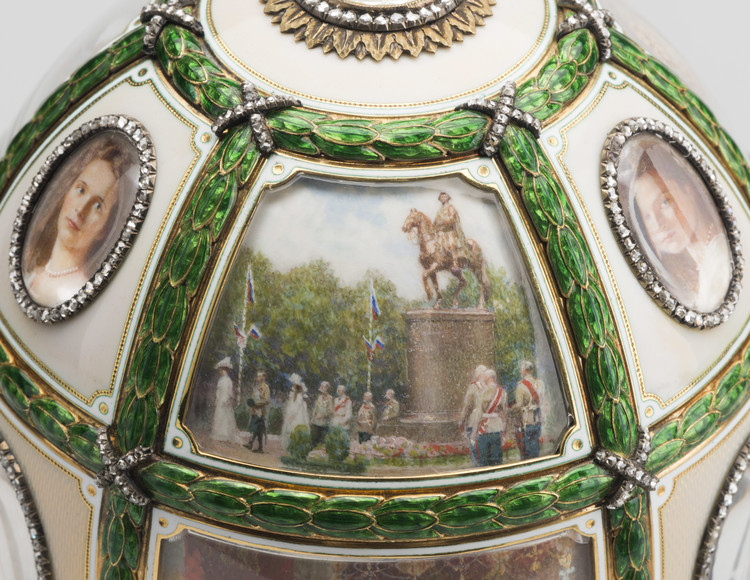 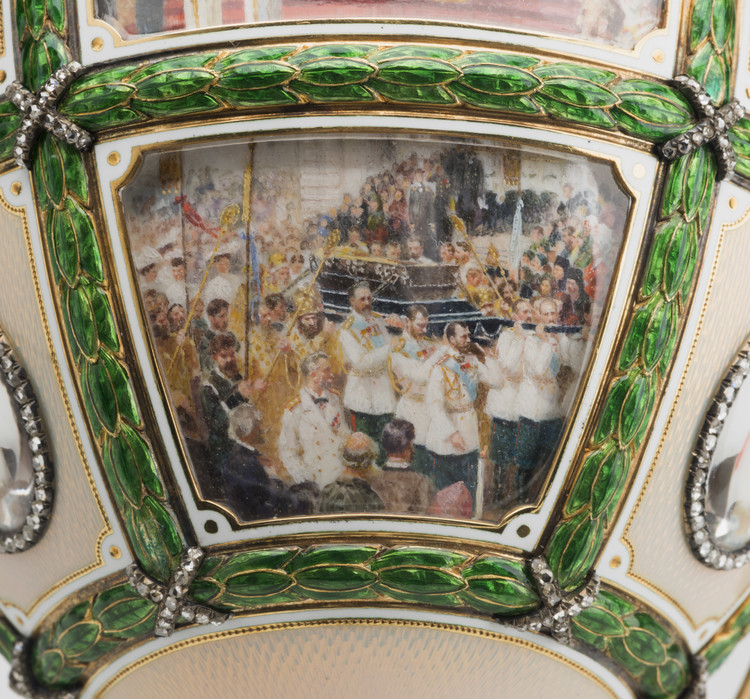 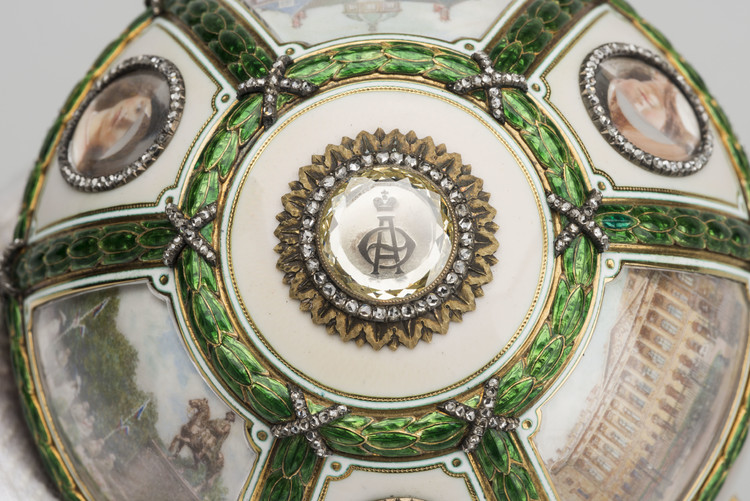 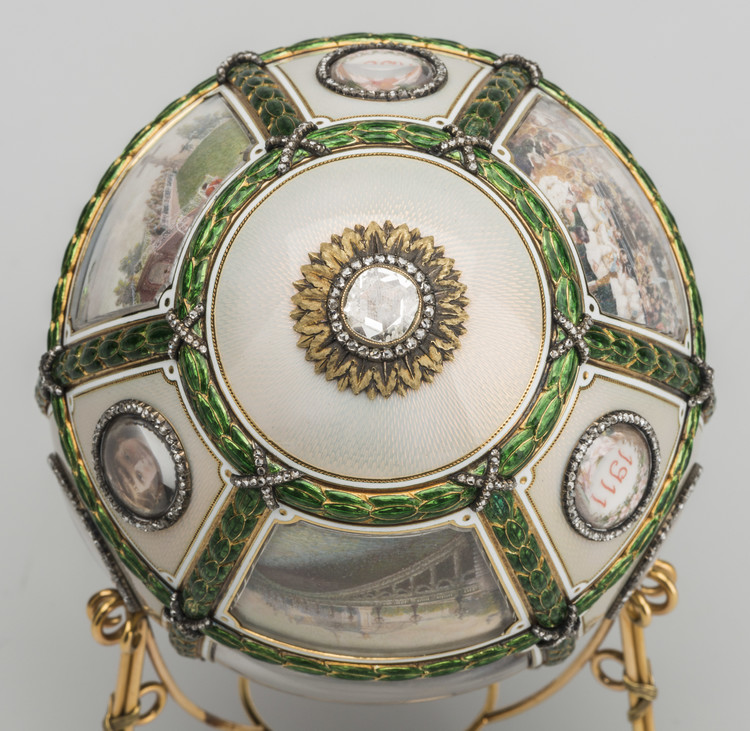 The second Imperial egg of 1911, given by Nicholas II to Alexandra Feodorovna, is dedicated to the anniversary date in the life of the empire and the Imperial family. On the shell, in an oval medallion beneath a convex rock crystal plaque, is the date Nicholas and Alexandra ascended the throne — 1894. Two years later they were crowned at the Cathedral of the Dormition in the Moscow Kremlin, and thus, 1911 marked the fifteenth anniversary of the coronation. Nevertheless, the 1916 issue of the magazine Stolitsa i usad’ba noted that the egg was dedicated to the “15th anniversary of the reign of Emperor Nicholas II.” The same source relates that the initials of the empress — AØ — with a crown are placed “on both peaks of the egg under flat, specially cut diamonds,” which can be seen with the naked eye, and the year, 1909.

The important political theme required a particularly formal artistic embodiment. The egg is one of the most colorful and picturesque Easter gifts in all senses of the words. There is no surprise as such, so the decoration of the egg is particularly magnificent: its gold shell is covered with iridescent white translucent enamel on guilloché and is divided into eighteen segments by relief enamel garlands of green with diamond ties. They are precious frames for miniatures “artistically and finely accomplished,” painted in watercolor on ivory and covered with rock crystal. There are seven portraits of the Imperial family — Nicholas II, Alexandra Feodorovna, their five children — as well as compositions depicting “the main events in the emperor’s reign.”
Thus, this is the only Easter gift of all the royal commissions to Fabergé that is decorated with both portraits and historical narrative compositions, done in watercolor on ivory by the famous St. Petersburg miniaturist Vasily Zuev. For example, he painted the majestic Mikhailovsky Palace, which on Nicholas II’s orders housed the national art museum, The Russian Museum of Emperor Alexander III, collector and patron of national art, in order to strengthen the idea of Autocracy and Orthodoxy. The core of the museum was formed by works from the Hermitage, Academy of Arts, Imperial residences, and “Imperial acquisitions,” made by Alexander III over the last fifteen to twenty years of his life for this museum of Russian art and sculpture.
Continuing the policy of his father, who had been known as “The Peacemaker,” Nicholas II proposed limiting the arms race “leading to a war of unprecedented proportions.” On his initiative an international peace conference was convened at The Hague in 1899, with its main goal to limit military budgets and arms. Several declarations and agreements were adopted and ratified and The Hague International Court was established. That great moment in world history is captured in a graceful miniature by Zuev, depicting the palace in The Hague, where the conference took place.
The Peace Palace at The Hague, like the Russian Museum, are Zuev’s architectural landscapes. Another is the miniature depicting the Alexander III Bridge in Paris founded by Nicholas II when he was in France in the fall of 1896.
Among the other historical events during the reign of Nicholas II depicted by Zuev on the egg are the unveiling of the monument of Peter I in Riga in 1910 and the erection of a stone cross in 1909 at the “Swedish grave,” commemorating the two-hundredth anniversary of the victory at Poltava, one of the battles of the Great Northern War between Russia and Sweden.
Other miniatures on the egg are narrative multifigure compositions, and the artist managed, despite their small size, to create the impression of large crowds and grand processions. In particular, this is evident in the depiction of the coronation procession on Cathedral Square in the Moscow Kremlin. Zuev captured the moment when Nicholas II, dressed in the uniform of the Lifeguard Preobrazhensky Regiment, and Alexandra Feodorovna in a dress of silver brocade slowly and majestically walk to the altar of the Cathedral of the Dormition. The theme is continued in another miniature depicting the solemn rite of Holy Coronation. The emperor is shown placing the crown of the Russian Empire upon his head.
Another important event in Russian history painted by Vasily Zuev was the opening of the First State Duma on April 27, 1906 It shows the emperor reading the manifesto. The Imperial mantle rests on the throne in the St. George (Throne) Hall of the Winter Palace. The Imperial regalia — crown, orb, scepter, and State Seal — are placed on either side of the throne. Along the walls, separated by a wide passage, are high-ranking persons and representatives of the legislative chambers: the highest officials of the State Council in gold-trimmed uniforms and the elected officials in suits and peasant garb.
In analyzing the selection of events for the miniatures, you inevitably conclude that the Fabergé house consulted with the emperor about the subject matter or were already informed of his preferences. Fabergé certainly knew that in placing a miniature of the transfer of the relics of St. Seraphim of Sarov he was capturing a significant event in the lives of the emperor and empress. Nicholas II was very interested in the life and person of the ascetic monk Seraphim, who died in 1833 in the Sarov monastery among the deep forests on the border of Nizhny Novgorod and Tambov provinces, and had been long considered a saint by the local peasants. When the Holy Synod canonized the monk, the emperor donated a lot of money to decorate the monastery, construct the reliquary for the saint’s relics, and organize the ceremony for their transfer. On May 17, 1903, Nicholas II, both empresses — Alexandra Feodorovna and Maria Feodorovna — the grand dukes Sergei Alexandrovich, Nikolai Nikolayevich, and Pyotr Nikolayevich, and other members of the Imperial family as well as priests traveled to Sarov. The next day they went to the Zosima and Sabbatius Church, where the coffin with St. Seraphim was kept. The emperor, grand dukes, and priests picked it up and transported it on stretchers to the Cathedral of the Dormition; this is the episode depicted on the miniature.
The miniatures were based primarily on official photographs and are notable for their technical mastery, elegance and perfection, and scrupulous depiction of costumes and accessories. Painstaking in execution, these miniatures were an ideal complement to such precious objects as the Easter eggs.
Back
Применить