The exhibition is located on the Museum’s second floor 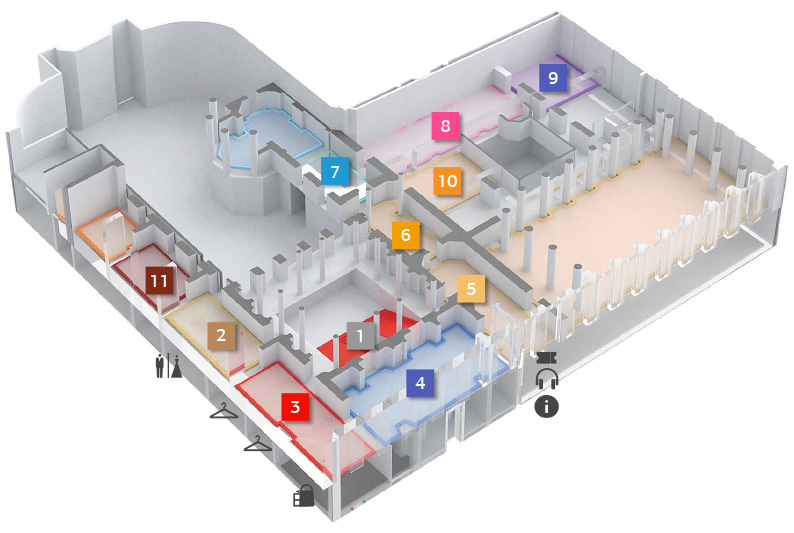 The Grand Staircase, flanked by a sculpture gallery, was constructed in the 1840s by Nikolai Efimov where the main passage once stood. Years later, the architect Rudolph Berngard built the exquisite decorative stucco dome over the staircase.

Military-themed works of art and applied art. The military theme links Karl Piratsky and Pyotr Balashov’s watercolors and the porcelain and silver items on display. The Knight’s Hall is named after the frieze on its walls, which depicts a medieval jousting tournament.

Russian silver. The Red Room is dedicated to Russian works produced in silver between the 18th and early 20th centuries. On display are spectacular pieces from the best firms in St. Petersburg (C. Fabergé, P. Sazikov, Nichols and Plinke, the Grachev Brothers and Tigelshtein), all of which had the distinction of being official suppliers for the imperial court.

Fabergé Easter Eggs. The palace’s central parlor features the Imperial Easter Eggs made for the last of the Romanovs. These remarkable works each have their own unique story and made the Fabergé brand a household name all over the world.

Gifts from the Tsars, objets de fantaisie made by the House of Fabergé and jeweled boxes. A significant portion of the items on display in the Gold Room are associated with the Romanov dynasty and their relatives abroad. Of particular note are the objets de fantaisie made by the Fabergé firm’s artisans, as well as the golden boxes with portraits of the Russian emperors.

Jewelry, miscellaneous small items, accessories and clocks. The anteroom contains a collection of household items once owned by the wealthy and which demonstrate the rich color palette of guilloché enamel, as well as jewelry – the least-preserved items of the Fabergé legacy.

Russian icons. Once the study of Count Pyotr Shuvalov, the Gothic Hall features a collection of Russian icons from the 16th-20th centuries, most of which are clad in frames made by famous jewelers from Moscow and St. Petersburg.

Russian and European painting from the turn of the 20th century. The Upper Dining Room features paintings by Russian and French masters from the late 19th and early 20th centuries. Of particular note are artworks by Pierre-Auguste Renoir and the great Russian impressionist Konstantin Korovin. Also on display are outstanding examples of Russian porcelain, particularly the Palace Vase painted by Fyodor Krasovsky.

Russian enamel. The Beige Room offers visitors a glimpse of the shapes and styles of tableware in use in Imperial Russia. The cigarette cases on display also provide visitors with an understanding of the techniques used in silver working and enamel decorating.